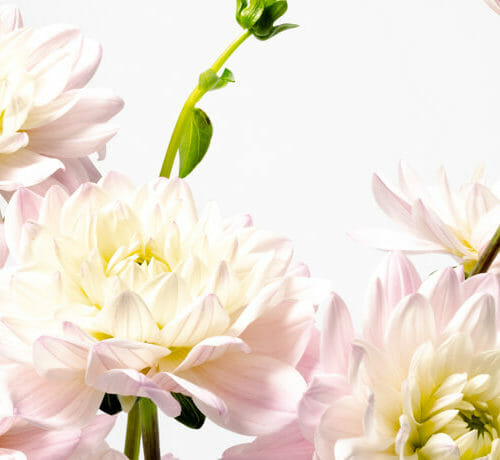 An ideal choice to say thank you

The dahlia is a stately and regal flower that was first discovered in the sixteenth century where it grew in the garden of the Aztecs. A symbol of dignity, this sculptural floral star has a variety of sensationally vibrant colours to its name with an immense variety that evoke a whole host of different moods and emotions; from friendship and sympathy to romance and sensuality. Although the dahlia has many incarnations, each flower boasts one common thread, its undeniable beauty.

Typically blooming during the late summer months, we’ve never made it simpler to send dahlias online and delight someone with a beautiful fresh flower gift. You can also order dahlias to send flowers direct to your home to add a splash of beauty and colour into your interior.

Send dahlias in London and throughout the UK today with www.bybloom.co.uk. We make it super simple to order dahlias online send the joy of flowers. Arrange to have your luxury dahlias delivered to your home or to a loved one’s door using the nations greenest courier, DPD.

Here at Bloom Flowers, founded by celebrity florist Larry Walshe, we offer complimentary standard delivery on all orders over £100 so if you are looking for a luxury flowers delivery, send dahlias today and share the joy that only flowers can give with a loved one today.

The History of Dahlia Flowers

Though dahlias have been grown in Europe for well over two hundred years, they are believed to have originated in Mexico and as such, are the national flower of Mexico. Dahlias are considered to have been named by the 18th-century Spanish botanist Abbé Cavanille in honour of Andreas Dahl, a Swedish environmentalist and scientist.

The florets of a Dahlia are often mistakenly called petals, even by horticulturists, but in fact every floret is actually a flower in its own right. Interestingly, Dahlias are part of the Asteraceae family; also known as the Daisy, Composite or Aster family. The name Asteraceae refers to the flowers’ appearance, which resembles a star shape.

The Aztecs grew dahlia tubers as a food however attempts to introduce them to the European diet did not succeed. We are not surprised; it’s not like they seem appetising on the menu now do they?!

How to Grow Dahlias

A few useful tips on how to grow your perfect dahlias:

A Rainbow of Colours

Dahlias come in a wide variety of colours and like many unscented flowers, use their vibrant blooms to attract pollinating insects. Dahlias can be found in almost every possible colour, except blue. Our favourites are always the pink and orange varieties as they cannot help but bring a room to life!

From Small to Large

Dahlias come all shapes and sizes; from a dainty diameters measuring 2cm to show-stopping varieties known as ‘dinner plate’ dahlias. These can grow up to 25cm in diameter and make a huge statement when decorating at home.

There has been a huge surge of demand and interest in a particular variety called Café au Lait dahlias over the last couple of years. Café au Lait dahlias are a delicate cappuccino coloured bloom with added blush tones that can grow to up to 25cm in diameter. They are a perfect wedding flower as the vintage palette pairs ideally against blush pinks, peaches and ivory tones. It also creates a vintage appearance which looks chic in every location from a barn to a stately home.

To keep your fresh cut dahlias looking their absolute best for as long as possible, place your vase in a cool and shady spot. Snip the stems regularly and change the water every 2-3 days. Always use the flower food provided to make sure you get the most out of your online flower delivery.

The Meaning of Dahlias

In the language of flowers, also referred to as floriography, dahlias represent “gratitude” and “dignity”. They are an ideal choice for thank you gifts and their bright colours are perfect if you want to send a fresh flower bouquet to cheer someone up.

Sign up to bloom and
join a sustainable floral
revolution today

when you sign up
recieve 500 points
to use immediately