Everyone knows about their birthstone or zodiac. We’re probably all guilty of reading our signs and personality traits at least once in our lives but, not many people know that there is also a birth flower.  This also has its own special meaning so we are here to let you know what your special flower is what it stands for.

Knowing all about the meaning of your birth flower can be super helpful when ordering the perfect birthday flowers to send to someone you love.  Here is our handy guide for every month’s birth flower:

January birth flowers are snowdrops and carnations.  It isn’t surprising given they are two of the best flowers to thrive during winter.  Carnations are extremely popular flowers with their big, ruffled petals in a range of colours.  Carnations date back thousands of years and held a special place in the hearts of many Christians.  It was believed that the very first carnations blossomed from the tears of Mary as she wept for Jesus.  The symbolism behind carnations can change dependent upon the colour; generally they are considered to symbolise loyalty, devotion and love.

February birth flowers are primrose and violet.  Most people assume that February would be the month of roses owing to Valentine’s Day however it is actually primroses and violets that are the official birth flower of this spring month.  February’s birthstone is amethyst so actually, when you think about it, it isn’t that surprising that violets are this birth month flower.  Don’t be surprised if this is why you love the colour purple!

Vivid violets have actually been around for many centuries.  They were cultivated by ancient Greeks who used them in medicines.  Violets have heart-shaped petals and were also reported to have been used in love potions therefore it is no surprise that today, violets symbolise humility, faithfulness and spiritual wisdom.

Primroses are thought to symbolise youth and confidence so those both in the month of February are likely to be humble, wise, honest and innocent.

The March birth flowers are jonquils and daffodils.  March is the month where spring is considered to official start so it makes total sense that daffodils are the primary birth month flower.  Full of sunshine and joy, daffodils are considered a sign of good luck and are also the official flower of Wales.

Daffodils have been in available in the UK since around the 17th century.  The wild blooms would once have been sold along the streets of London by wandering flower girls.  Today, they are found in every supermarket and florist around the UK.  They are commonly considered to be yellow but you can also buy a range of white and orange varieties too.

The April birth flowers are sweet pea & daisy.  Whilst the delightfully cheerful daisy is more commonly seen in the feeds as opposed to a vase at home, giving someone born in the month of April a bunch of vibrant gerbera daisies will undoubtedly bring a massive smile to their face.

Daises are reported to be one of the oldest flowers on earth.  It was reported that drawings of them were carved into stones dating back to at least 3000BC.

The sweet pea flower originated in Southern Italy and the UK.  They are now grown all over the world with the best still being cultivated in Italy and England.  Those born in April are most likely sweet, just like the scent of the sweet peas.

Those born in April are likely loyal, kind and generally wonderful.  Gerbera Daisies are a fantastic gift – now the question is which colour of flowers do you send?

May:  Hawthorn & Lily of the Valley

It is reported that when Eve’s tears fell after she was banned from the Garden of Eden, lily of the valley grew.  Lily of the Valley is known to represent sweetness, humility and the return of happiness.  They are an ideal Mother’s Day gift so make sure send lily of the valley flowers when you want to show your mum how much you care.

The June birth flowers are honeysuckle and roses.  June babies can feel confident that they have been born in the month of one of the world’s most popular flowers; the rose.  Available in a wide variety of colours, all of which have different associated meanings, roses are the perfect flowers to send for almost every celebration or occasion.

Roses are a luxury flower that has been adored by many for centuries.  They have actually been reported to have been  mentioned in history books dating back as far as 551 BC!

Generally, roses symbolise love, honour, devotion and beauty so they are most definitely a birth flower to be proud of if you are both in the month of June!

The July birth flowers are water lilies and delphinium.  With associations of positivity and happiness, delphiniums are a cheerful flower that is sure to brighten up someone’s day!  Delphiniums are a British bloom, often found growing across the whole of the UK.

The name delphinium is derived from Greeks who believed that the shape of the flower bud look like the nose of a dolphin.

Delphinium flowers are reported to symbolise positivity, dignity, an open heart and grace.  As such, those born in the month of July are likely kind-hearted, lovely people to be around.

The August birth flowers are poppies and gladioli.  Available in a wide range of joyous colours, the flowers are incredibly popular during the summer month.

Gladiolus originate from South Africa and their name was derived from the Latin “gladius” which meant sword owing to their distinct, pointy shape.  The gladiolus flower (or gladioli in plural!) are known to represent honesty, generosity, strength of character and moral integrity.  Those born in the month of August are likely to have the strength of a lion and be fiercely independent.

The September birth flowers are morning glory and aster.  Considered the “star” of the year, aster flowers were reportedly named after the Greek word for “star” because of their shape.  Asters are super dainty blooms that are wonderfully beautiful and come in a range of colours including white, red, pink & lilac.

Asters are known for symbolising wisdom, love, innocence & faith.  They are ideal flowers to send to friends on a birthday in September.

The October birth flowers are cosmos and marigold.  Sporting fabulous autumn colours, marigolds are perfect for those born in the month of October.

A gardener’s favourite, marigolds have a long history dating back to the Aztec’s who reportedly use them for their medicinal properties.  Marigolds were often used to assist with skin conditions and inflammation.

Marigolds are considered to represent determination and stubbornness as they are a sturdy garden flower.  That being said, their vibrancy also symbolises creativity and warmth so if you are born in the month of October, you are likely to be a driven, hard-working individual.

The November birth flower is the chrysanthemum.  Available in a huge variety of colour, these large flowers are hugely popular throughout the world and considered to bring joy and good luck into any home.  In fact, they are so popular in China & Japan that they even have their own special day dedicated to them; it’s a festival called the “Festival of Happiness”

There’s lots of meanings to chrysanthemum flowers owing to their huge range of colours but in general, they symbolise happiness, honesty & friendship.

The December birth flowers are narcissus and holly.  It’s not exactly surprising that holly is the birth flower in December – it’s so festive!  Technically, holly isn’t a flower but it’s glossy green leaves and bright red berries scream Christmas and are the perfect inclusions in a festive bouquet.

Holly was originally considered a symbol of fertility and an effective deterrent from Pagan witches before it later became one of the nation’s favourite winter decoration ingredients.  Nowadays, no home at Christmas is complete without holly on the mantlepiece or dining table.

Holly is considered to represent peace, merriment and good fortune.  Holly is the perfect ingredient in a birthday bouquet for anyone born in the month of December. 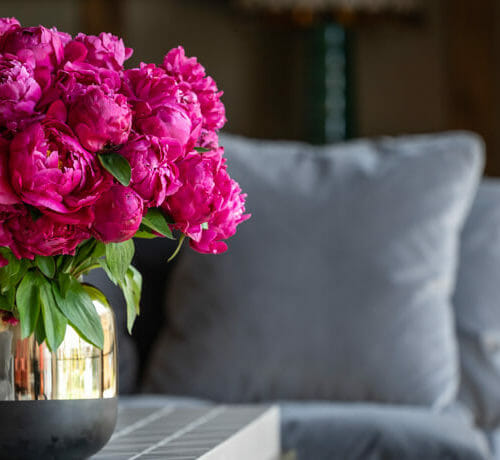